Marche is a plural region, where history, culture, art, architecture and nature mix perfectly, creating an extraordinary and unique reality. In a few kilometres it is possible to admire mountain landscapes, seashores, uncontaminated and suggestive surroundings, breathe air of culture in every medieval village and city of art that decorate a land in everlasting balance between present and past. Land of artists, poets, scientists and businessmen, it has been able to change itself and be what it is today: a vital region where to live-well in. 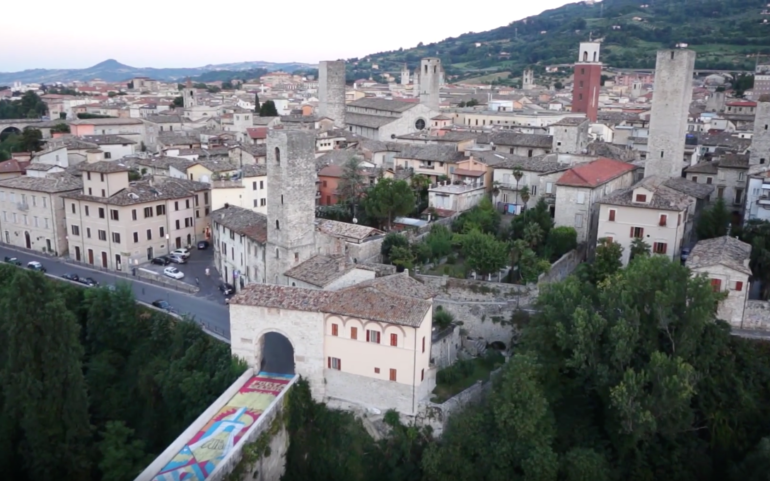 Rotella rises at the foot of the Ascension Mountain where valleys and hills of every green shade seem to protect her. Proud of her antique origins which have to be preserved, guarded and handed down like the brand new historical archive of the city testifies, in which many acts dating back to 1659 are kept, historiographical proof of the united period, resolutions and certificates dating back to the second half of the twentieth century.

Documents collected in bundles, made available through a modern and well-appointed office in a wing of the Town Hall, opposite the fifteenth century civic clock tower, the symbol of the town. Despite the urban renewal imposed by landslides even its architectural heritage is remarkable and worthy of interest. Remnants of fortifications and religious buildings can be seen throughout the city.

The parish Church in Poggio Canoso is dominated by the antique fortified fortress and preserves a Romanesque portal and a precious painting by Pietro Alemanno; fifteenth century frescos and precious relics are found in various sacred buildings in Castel di Croce and Capradosso; in the district’s main town is found the rectangular shaped Baroque Church of Santa Maria and San Lorenzo (1767), which contains the paintings of Filippo Ricci.

Like all the districts that belong to the Mountain Community of the Sibillini, Rotella is surrounded by a beautiful and enchanting natural landscape full of historical and culinary traditions that make the vacation unforgettable.

Poggio Canoso is today a small Medieval village at the foot of Mount Ascension, once called the Black Mountain, from the Greek Neridas-water-that means mountain rich of water. After the year 309 A.D. it took the name of Polesio, from the virgin Polisia, daughter of the roman prefect of Ascoli, who became a Christian; ever since wrapped in a mysterious past of old legends, fascinating episodes and magic rituals, when its forests hosted the spring celebrations in honour of Venus and Diana, only after the XV century it was called the Mountain of the Ascension, when they began to celebrate the ascension of Christ with dances and fire that today still recall old pagan rituals.

Poggio Canoso was built between the XII and the XIII century by the Benedictine Monks of Farfa. It was called Poggio because it was positioned on top of a rocky hill, Canoso seems to derive from Latin canus, old – for the white limestone on which it is built- (it is also called Poggio Antico), or from its shape, which can resemble a dog lying down; an opinion supported by the fact that the emblem of Poggio Canoso includes an image of a dog in a proud and challenging pose.

Thanks to its strategic position, ever since the fifth century A.D. it was a place settled to escape the barbaric invasions. Its name seems to come from “forca” (fork) due to her position between the Aso valley, that of the Tesino and of Tronto.

Her notoriety throughout the region is due to the craftsmanship of copper and namely to the coppersmiths who in their shops continue a centuries old tradition giving life to unique, refined and precious objects for ornamental and domestic use.

The latter are also characterized by their language known as “baccaiamento”, conceived in the past and used by merchants during fairs and markets to keep discourses from prying ears.
The quintessential place where it is possible to admire the products of this historical “trade” and try to create some object, thanks to an educational workshop, is the Museum of Copper located in the former Church of St. Blaise and the Canestrari Palace.

In the latter there is also the Museum of Sacred Art, which houses valuable artefacts from the local churches among which the church of San Francesco, which contains two tablets of the famous triptych painting by Crivelli.

To complete the tourist offer, there are numerous festivals (the Feast of the Crucifix) and special culinary events, such as the festival of “penne with truffle and porcini mushrooms”, the festival of “cacciannanze” and “Ancient flavours”.